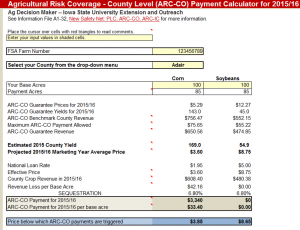 The Average Crop Revenue Election (ACRE), a counter-cyclical program created in the 2008 farm bill has had limited participation by Iowa producers. In addition to the Direct & Counter-Cyclical Payment (DCP) programs, a producer could also enroll by FSA farm number in this new ACRE program. There was a cost of participation, as a producer was required to give up 20% of their Direct Payment (DP) annually.

The ACRE program used a combination of state average yields, farm level yields and the national marketing year average (MYA) national cash price to determine levels of revenue guarantees and payments for each covered commodity on a farm enrolled. There were two revenue triggers that had to be met annually before any ACRE payments were generated, one at the state level and one at the farm level.

2013 ACRE payment is approximately $45 per base acre for corn

To trigger a payment under ACRE the “actual” revenue for both the state and the farm must be less than their corresponding guarantees. The actual revenues are the current marketing year cash price multiplied by the state average yield and the actual farm level yield, respectively. If both triggers are reached, the payment to the farm will be the difference between the state revenue guarantee and the state actual revenue.

The payment level cannot exceed 25% of the state guarantee, however. It will also be adjusted up or down by the ratio of the farm Olympic average yield to the state Olympic average yield. For example, if the farm average yield is 10% above the state average yield, the ACRE payment will be increased by 10% for that farm. Because of this 10% limit, the state revenue guarantee for 2013 was $781. The actual state revenue was approximately $736 per acre or 165 bushel per acre state corn yield times $4.46 per bushel national cash price in 2013. This leaves a shortfall in revenue of approximately $45 per base acre of corn.

The 2013 ACRE payment was made on 85% of the farm’s base acres. However, the total planted acres that receive a payment cannot exceed the total base acres for all crops established for the counter-cyclical payments. Producers who signed up for the 2013 ACRE program did receive 80% of the direct payments that have been paid in 2013, regardless of actual prices or yields each year.

For those 6,000 Iowa farms enrolled in the 2013 ACRE program, they were required to submit 2013 actual farm’s yields to their local FSA office by mid-July. Those same farms will still need to meet both the farm and state triggers. That payment to the farm will be the difference between the state revenue guarantee and the state actual revenue, which appears likely for corn for the 2013 crop. Since the MYA national cash price was not known until September 29, 2014, the ACRE payment is not made until October 2014. Payments to those farms enrolled and appropriate yield information is expected to be made by FSA after October 10, 2014.

Iowa State University Extension created an Average Crop Revenue Election (ACRE) Payment Estimator, an online tool, in 2008 to assist producers as they determined if they should enroll in the ACRE program. The calculator has since been updated. You can use this same calculator now to estimate the potential 2013 ACRE payment for your farm, which appears likely for corn base acres. You can find an Information File and Decision Tool titled Average Crop Revenue (ACRE) on the Ag Decision Maker website.

Government Programs ACRE, government payments, Government Programs
Leave a Comment on 2013 ACRE revenue shortfall triggers corn payment
Farmers can Update Yield History and/or Reallocate Base Acres through Feb. 27, 2015;
Producers Select the Safety Net Program Best for Their Operation Beginning Nov. 17, 2014 through March 31, 2015
WASHINGTON, Oct. 2, 2014 – The U.S. Department of Agriculture (USDA) is announcing key dates for farm owners and producers to keep in mind regarding the new 2014 Farm Bill established programs, Agriculture Risk Coverage (ARC) and Price Loss Coverage (PLC). The new programs, designed to help producers better manage risk, usher in one of the most significant reforms to U.S. farm programs in decades.
“The ARC and PLC programs are a significant reform in the farm safety net,” said Farm Service Agency (FSA) Administrator Val Dolcini. “FSA wants to keep producers well informed on all steps in the process. We will continue our outreach efforts and maintain resources online to help them understand the new programs before they come in to make decisions for their operations.”
Dates associated with ARC and PLC that farm owners and producers need to know:
USDA leaders will visit with producers across the country to share information and answer questions on the ARC and PLC programs.
USDA helped create online tools to assist in the decision process, allowing farm owners and producers to enter information about their operation and see projections that show what ARC and/or PLC will mean for them under possible future scenarios. The new tools are now available at www.fsa.usda.gov/arc-plc. Farm owners and producers can access the online resources from the convenience of their home computer or mobile device at any time. USDA provided $3 million to the Food and Agricultural Policy Research Institute (FAPRI) at the University of Missouri and the Agricultural and Food Policy Center (AFPC) at Texas A&M (co-leads for the National Association of Agricultural and Food Policy), along with the University of Illinois (lead for the National Coalition for Producer Education) to develop these online tools.
Covered commodities include barley, canola, large and small chickpeas, corn, crambe, flaxseed, grain sorghum, lentils, mustard seed, oats, peanuts, dry peas, rapeseed, long grain rice, medium grain rice (which includes short grain rice), safflower seed, sesame, soybeans, sunflower seed and wheat. Upland cotton is no longer a covered commodity.

Today’s announcement was made possible through the 2014 Farm Bill, which builds on historic economic gains in rural America over the past five years, while achieving meaningful reform and billions of dollars in savings for the taxpayer. Since enactment, USDA has made significant progress to implement each provision of this critical legislation, including providing disaster relief to farmers and ranchers; strengthening risk management tools; expanding access to rural credit; funding critical research; establishing innovative public-private conservation partnerships; developing new markets for rural-made products; and investing in infrastructure, housing and community facilities to help improve quality of life in rural America. For more information, visit www.usda.gov/farmbill.