Supplemental Coverage Option (SCO) crop insurance was introduced in the 2014 Farm Bill but was limited to acres enrolled in the Price Loss Coverage (PLC) commodity program. SCO was not available when Agricultural Risk Coverage (ARC) was chosen by crop by FSA farm number. ARC was the choice for nearly 98 percent of the Iowa’s base corn acres and over 99 percent of the base soybean acres from 2014 through 2018.

As a result, SCO was not a crop insurance choice for very many farms through 2018. Similar to the 2014 Farm Bill the 2018 Farm Bill again gives farmers a choice by crop by FSA farm number to elect and enroll in either the ARC-County or the PLC program.

However, with the 2018 Farm Bill being implemented in 2019, the expectation of some experts is that many farmers will eventually enroll in the PLC program for the 2019 and 2020 crop years, especially on their corn base acres. That’s because of the potential for the PLC program to trigger payments should the final national average cash price fall below the $3.70 per bushel reference price. Enrollment in PLC will lead to more insured crop acres being eligible for the purchase of SCO. For 2019, SCO premiums appear very attractive as compared to Revenue Protection (RP) at higher coverage levels.

Coverage based on county revenue

The SCO band of coverage will be based on the county revenue given that the underlying crop insurance product is RP. SCO provides a protection in a band at an 86 percent maximum level down to the coverage level selected for RP. An example would be a farmer who selects a 75 percent coverage level for RP in addition to the SCO product. Thus, SCO could provide county-based revenue coverage from the 86 percent to the 75 percent level.

The primary advantage of using SCO is a lower farmer-paid premium. The costs of an RP-SCO combination product will usually be lower than the 85 percent RP product alone for two reasons.

First, the county yields are typically less variable than the farm yields, resulting in fewer payments for a county-based product than for a farm-level product at the same coverage level. Lower payments then result in a lower premium. Second, SCO has a subsidy rate of 65 percent which is a higher than the RP at the 85 percent coverage levels using enterprise units. This 65 percent subsidy rate is higher than all subsidy levels for basic and optional units when the coverage level is above 50 percent. These government paid premiums are reflected in Table 1 below. 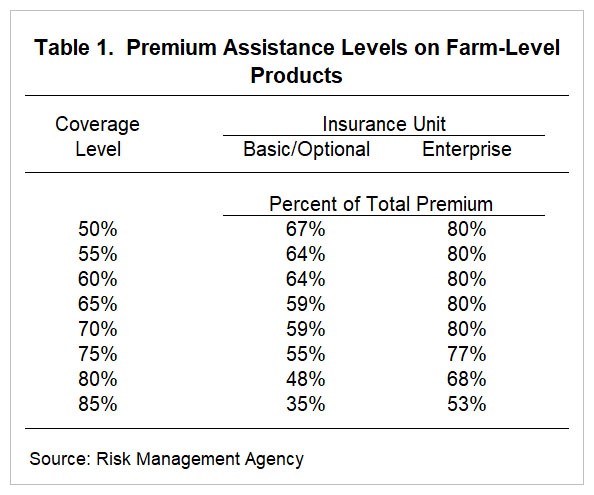 Who should consider SCO?

Farmers who typically purchase RP at high coverage levels could find SCO useful, particularly if a lower coverage level is selected that might result in a lower farmer-paid premium. However, the farmer should have the intention of eventually electing and enrolling those crops on those farms in the PLC program. Farmers interested in SCO coverage for 2019 should discuss premiums and choices with their crop insurance agent before the March 15 sales closing deadline on spring planted crops.