What if my rhubarb freezes? 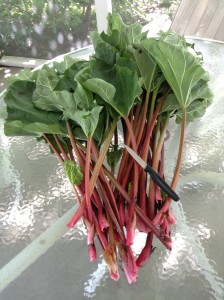 A sure sign of spring at AnswerLine are the calls from people concerned about the safety of their rhubarb plants. It seems like every year we have a week or so of really nice temperatures that allow the rhubarb plants to grow vigorously. Then the temperatures take a dive and we have a frost or freezing weather.  There is an old wives tale that says rhubarb that has frozen is poisonous and that you should destroy or dig up your plants to stay safe.

That old wives tale is just that; a tale that is not correct.   If your patch of rhubarb freezes, the fleshy part of the plant will freeze.  After a day or two, the frozen leaves and stems will become soft and blackened.  This is a result of the damage that freezing and thawing cause to the plant.  Most people, when they pick rhubarb, are particular and choose the nicest, freshest looking stalks.  They would not choose softened, black, or mushy stalks.  Those stalks should be pulled and discarded; this is something most people would do without thinking.

Remember, only the stalks or petioles should be eaten because the leaves contain moderately poisonous oxalic acid.  It is generally recommended that home gardeners stop harvesting rhubarb in early to mid-June. Continued harvest through the summer months would weaken the plants and reduce the yield and quality of next year’s crop. The rhubarb stalks may become somewhat woody by mid-summer, but they don’t become poisonous. Sometimes we have callers wanting to harvest enough for a crisp or a pie during mid-summer.  We tell them to look for some smaller, tender stalks that could be pulled.  If the rhubarb patch is an older, established patch pulling a few stalks should not cause permanent damage to the patch.

28 thoughts on “What if my rhubarb freezes?”