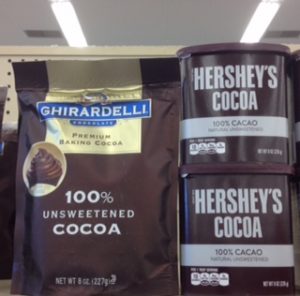 We recently had a caller wanting to make a Chocolate Banana Bread recipe calling for Dutch-process cocoa. She did not have any on hand and was wondering what the difference was between it and Natural Cocoa.

There are two basic types of cocoa – Natural and Dutch-process. Natural cocoa is solid unsweetened chocolate that has had most of its fat removed before being ground into powder. Dutch-process cocoa is Natural cocoa that has been treated with an alkalizing agent to lower its acidity allowing for more chocolate flavor. That difference in acidity though means you cannot always substitute one type of cocoa for another in recipes due to the type and amount of leavener also used in the recipe.

If your recipe calls for baking powder – or baking powder predominantly along with some baking soda- choose either type of cocoa. The baking powder has already balanced the acidity in the recipe so the cocoa is used more for flavoring than leavening.

If your recipe calls for predominantly baking soda and there are no other acidic ingredients (yogurt, vinegar, buttermilk, sour cream, etc), you will want to use the Natural cocoa. The Natural cocoa’s acidity will neutralize baking soda’s potentially strong flavor.

Many people prefer to use a combination cocoa that will work in most all recipes. Hershey’s Special Dark Cocoa is a combination of both Natural and Dutch-process cocoas.

If you are making a recipe that calls for cocoa but no leavening, such as hot fudge sauce or hot chocolate, it is fine to use either cocoa as you are using it for flavor.

2 thoughts on “Natural vs Dutch-process Cocoa”