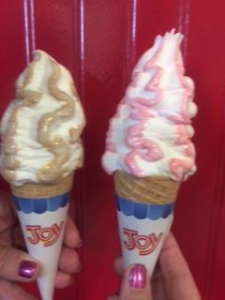 July was National Ice Cream Month, August 8th was National Frozen Custard Day and August 19th National Soft Ice Cream Day! It seems there are more and more choices in the frozen dessert aisle these days which got me wondering what the difference is among the different types of frozen desserts. U.S. law classifies ice creams by their percentage of milk fat content. By that federal law, ice cream must contain at least 10% milkfat. It is made with more cream than milk so because of the higher fat content, up to 50% of the volume of the ice cream consists of air that has been churned into it. As you know, it is much easier to whip air into cream than into milk.

Super Premium ice cream, as you might expect, has the most fat – between 14% and 18%. If it is the French style of ice cream, it is a cooked custard made with egg yolks. Frozen custard or French ice cream must have  at least 1.4% egg yolk solids. Frozen custard is significantly richer than ice creams made without eggs.

Regular ice cream is much less dense than Super Premium or Premium ice cream. It has between 10% and 11% fat and a lot more air. This is the type of ice cream made by large manufacturers usually in the basic flavors.

Economy ice cream contains exactly 10% fat, which again is the minimum USDA standard. Anything with less than 10% fat cannot be considered ice cream without being labeled “light”.

Soft serve is molecularly similar to regular ice cream but is served at a higher temperature that allows it to be extruded into a soft swirl and gives it a lighter, softer texture. Soft serve has a lower fat content and interestingly enough, its warmer temperature actually allows your taste buds to taste the ice cream better!

You will also find sorbet, sherbet and gelato in the frozen dessert aisle. Sorbet is made from water and fruit puree or juice. It contains no milk, cream or eggs.

Sherbet is not quite ice cream and not quite sorbet. It is made with fruit and water but also has the addition of dairy. It has a slightly creamier texture than sorbet. By law, sherbet must have less than 2% fat.

Gelato is made with regular milk. It may seem to have a richer texture than ice cream but it’s dense texture from not being able to churn as much air into it compared to ice cream is what creates a richer mouth feel. Because gelato has less fat than ice cream, the flavors of gelato are typically stronger. Gelato is typically made with natural ingredients where ice cream often is made with a combination of artificial flavorings and natural fruit.

Summer is my favorite season and part of it has to do with my enjoyment of frozen desserts! I hope you are enjoying some this Summer as well!