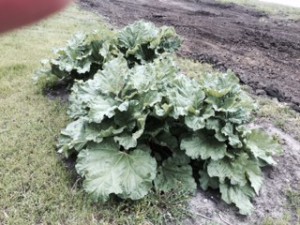 When should I stop cutting my asparagus?  How long can I harvest my rhubarb?  Is rhubarb that I pull in the summer poisonous?  We will be getting these questions from callers very soon.

Allow a new planting of asparagus to grow for a year at least, before the first cutting.  During the second spring, it is safe to cut asparagus for three to four weeks.  After that time has passed, allow the plant to grow.  During year three, it is safe to harvest asparagus until mid-June.  The safety factor we mention is safety for the plant.  Overharvesting will weaken the plant and may cause plants to be less productive in the future.  Harvest asparagus by cutting or snapping the spears when they reach a height of 6 to 8 inches.  An asparagus bed that has been cared for well can last 15 years or even longer.  Mine has been productive for 38 years and is still going strong.

Harvest rhubarb when the stalks are between 10 and 15 inches tall.  Simply hold a stalk near the base and pull it up and to one side. Another option would be to cut the stalks off level with the ground using a sharp knife.  Remove the leaves from the stalk right away.  After that, rhubarb can be stored in a plastic bag for at least two weeks.  Remember that over harvesting rhubarb can damage the plant; never remover more than half the fully developed stalks at one time.

Start a new rhubarb patch by dividing an older, existing patch. It is best to delay harvesting the new patch for the first two years.  During the third year, harvest only for four to six weeks; stopping harvest in mid-June.  If your rhubarb sends up flower stalks, remove them as allowing the plants to flower will reduce production the next year.  Stopping harvest in mid-June also allows the plant to feed the roots and keep the plant strong. You may fertilize the planting with some all-purpose fertilizer in the spring. Use about ½ cup of 10-10-10 fertilizer early in the spring. Remembering to water the rhubarb during long dry summers will help the planting have a long life.

Callers often ask if they can harvest a bit of rhubarb later in the summer. We tell them that if the patch is an older, well-established one then they could pull enough small, tender stalks to make a pie or a crisp. Harvesting more than that can damage the planting. And, no, the rhubarb is not poisonous if pulled mid-summer.

Enjoy those first foods from the garden.