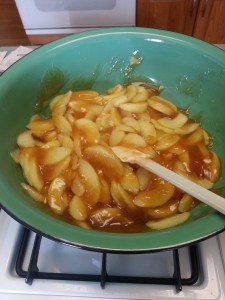 It is the time of the year for callers to be canning pie fillings. Callers want to can a filling that can go straight from the canning jar into the pie. That is not always possible since the only recommended thickener for pie fillings is a product called Clear Jel. This product is not readily available in stores like so many other canning products. At the time researchers were developing pie filling recipes, they anticipated that Clear Jel would be sold alongside other canning supplies. At this time, the easiest way to purchase Clear Jel is on the internet. It is very difficult to find Clear Jel at a local store.

Callers often wonder why Clear Jel is the only recommended thickener. Not all starches perform the same way; Clear Jel can be heated and cooled several times and still maintain the same thickening power. Cornstarch used to thicken pie filling can form clumps and cause the cloudiness inside the jar. Pie filling made with cornstarch may not thicken while the pie is baking.

It can be tempting to just experiment with adding a bit of flour or cornstarch to your recipe but the National Center for Home Food Preservation tells us that it is a bad idea. Here is their explanation.

“In general, you are correct — it is NOT safe to add flour/corn flour or any other thickening agents to just any canning recipe. Thickening agents slow the ability of heat to penetrate throughout the product. Heat must be distributed evenly and at a high enough temperature in order to destroy mold, yeast, and bacteria. In low-acid foods (vegetables and meats for example), there is a risk of causing botulism if the product is not heated properly in the canner. Adding a thickener to a tested recipe and then processing it for the same amount of time as tested without a thickener would risk under-processing of that product, and in turn, would risk causing food poisoning/spoilage.”

There are a couple of recipes that do include flour on the National Center for Home Food Preservation website. “In the particular case of the Pickled Corn Relish, the recipe was tested with the flour paste thickener as part of the ingredients and approved by the thermal process authority providing that recipe. That is why we can recommend adding this particular flour paste to this particular recipe. As you can see from looking over the ingredients list, there is a large portion of vinegar in this recipe, which does play an important role in the safety of pickled foods and does also influence the margin of safety for adding the thickening agent. There also is not that much thickening that occurs; the resulting brine in this product is still quite watery, so it’s not excessive thickening. The amount recommended should not be increased, however, and it should be incorporated just as described. We do not know the effects of adding the same flour paste to other recipes, however, so we would not recommend using it in other canning recipes.’

Please resist the temptation to add a thickener not listed in a recipe. Keep your family safe. You can always easily thicken canned apples or other fruits for use in a pie.  You may see some new thickeners on the market but for now, Clear Jel is the only recommended thickener for use in pie fillings.

47 thoughts on “Thickeners for Home Canning”