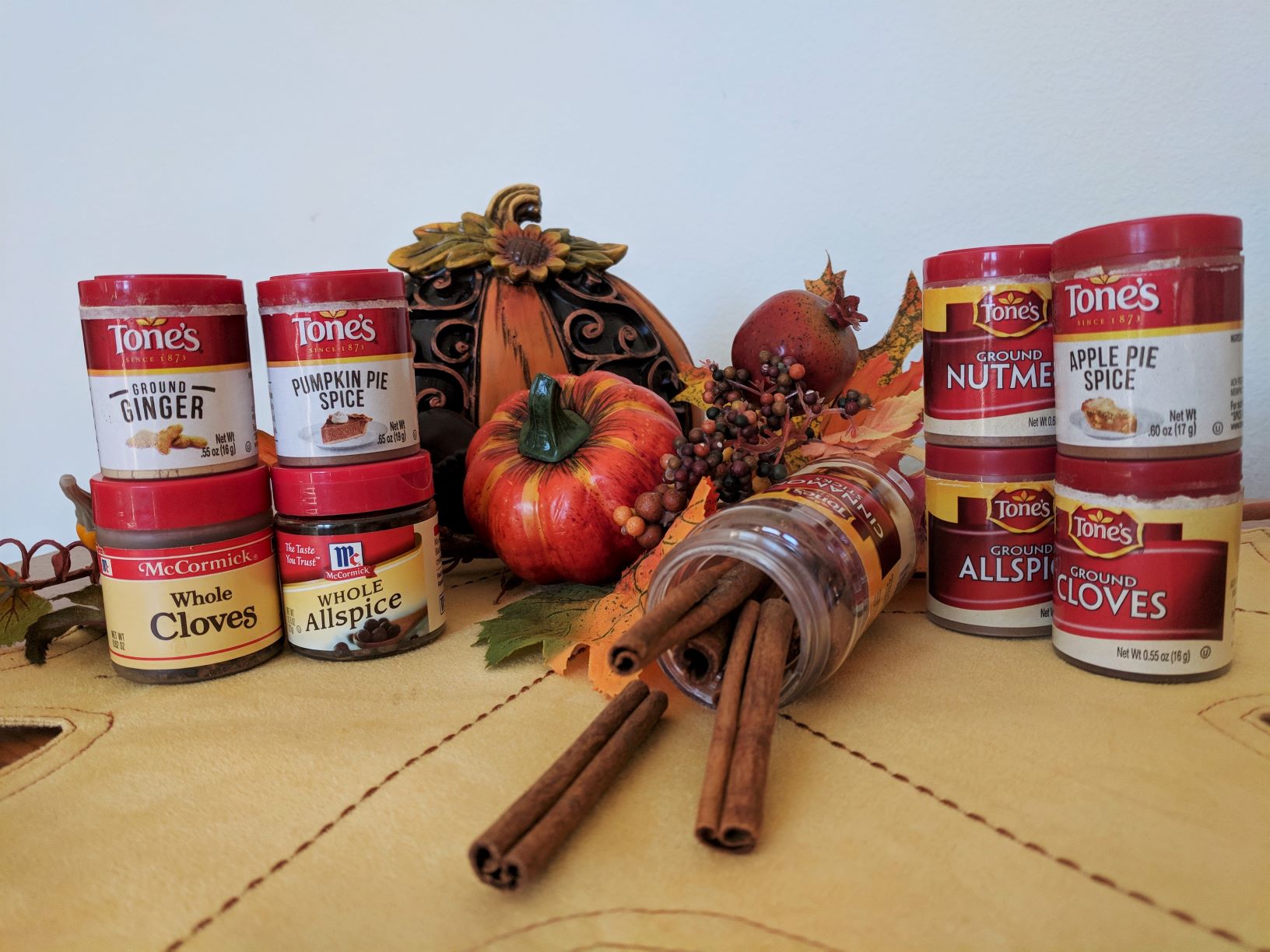 Summer may not be over yet but people are already craving spice-flavored foods, beverages,and smells.  Even before we had our Labor Day barbeques, Starbucks introduced it’s fall Pumpkin Spice Latte because customers were asking.  “Sweet” spices–cinnamon, nutmeg, cloves, allspice, and ginger–go hand in hand with fall and holidays.  Now is a good time to prepare for the season of “spice and nice” and soups and stews by going through our spice collection to make sure we are ready when it comes time to reach.
Ground spices retain their goodness for about six months.  Whole spices such as allspice berries and cinnamon sticks stay fresher longer, 1-2 years, if stored in air-tight containers.  Vanilla extract is commonly used with the “sweet” spices to bring out their best.  Vanilla retains it’s best flavor for 12 months.  And while one is in the process, why not check out the herbs, too.  Like ground spices, herbs retain their best flavor for six months.  All spices and extracts should be kept in locations away from heat and light.  If a date is not present on the container, apply the smell test.  If you don’t detect an intense fragrance when you open the container, it’s likely time to replace it.  I’m always amazed at how much more flavorable something tastes when fresh spices or herbs are used.
While fall spices are reminenct of crips days, rustling leaves, baked goods, and hearty soups and stews, there are always lots of questions about which to use for what.  Here’s a quick primer:
Allspice (whole or ground)  is the dried unripe berries of the Pimenta dioica tree found in wamer parts of the world.  The berries combine the flavors of cinnamon, nutmeg, and cloves and complements stews, yellow vegetables, pork, poultry, cakes, cookies, and sweet breads.  When ground allspice is not available, a good substitution is a mixture of half ground cinnamon and half ground cloves.
Cardomom is a blend of seeds that bring a warm and aromatic flavor that is delightful in baked goods like gingerbread; it is also a staple of Indian cuisine. It is often used  with cinnamon, cloves and chocolate.
Cinnamon (ground or stick) is a spice obtained from the inner bark of  the Cinnamomum tree. With its mildly-sweet-to-bittersweet flavor, cinnamon is a nice addition to baked goods, stews, curries, fruit, squash, oatmeal, pork and beef.  It pairs well with fruits and chocolate.  Cinnamon sticks are perfect for mulling cider, tea, or other fall beverages.
Cloves (whole and ground) are the aromatic flower buds from a tree found in India and other countries in that part of the world.  Cloves goes well with sweet breads, yellow vegetables, chocolate, and fruit.
Chili powder is the dried, pulverized fruit of one or more varieties of chili peppers, sometimes with the addition of other spices. It is used as a spice to add pungency and flavor to dishes. Commonly used in traditional Latin American dishes like enchiladas and tacos, a spoonful of chili powder also adds a welcome kick to grilled meats, stew, soup, a pot of beans, vegetables, and even chocolate.
Ginger adds a pungent zest to both sweet and savory dishes. It is derived from the Ginger plant rhizome known as ginger root or simply ginger.   Ginger is widely used as a spice or a folk medicine.  As a spice, ginger has so many uses:  baked goods, stir-fries, curries, hot tea and seafood. It also offers a great accent to garlic.
Spice Mixes (Apple Pie Spice, Pumpkin Pie Spice) are blends of ground cinnamon, cloves, allspice, nutmeg, and ginger made specifically for convenience.  Both can be used as a seasoning in pie as well as general cooking and baking to enhance the flavors of any products using apples or pumpkin/squash.  There are many DIY recipes for making blends using basic spices such as these.
Enjoy the coming of fall and the smells and flavors that enhance it!

One thought on “Fall Spice Refresher”