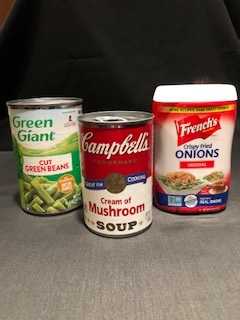 Originally called “Green Bean Bake”, we know the recipe as Green Bean Casserole today. It is a favorite Holiday side dish at my house and in many others too I’m sure. You may not know that the inventor of this recipe recently passed away. Her name was Dorcas Reilly and she was 92 years old when she passed away on October 15, 2018.

Dorcas was working as a supervisor in the home economics department of a Campbell’s test kitchen in New Jersey in 1955 when she was given an assignment to create a recipe using ingredients any cook would have on hand at home including Campbell’s mushroom soup and green beans. The recipe she and her team came up with consisted of just six ingredients: Campbell’s cream of mushroom soup, milk, soy sauce, black pepper, green beans, and crunchy fried onions. She has said she and her team talked about adding celery salt and ham to the recipe but decided to just keep it simple with minimal prep time needed, affordable ingredients that could be stirred together, and a short amount of bake time. Plus the recipe worked well with canned or frozen green beans. Cheap, fuss-free cooking was all the rage for post-War America at that time. More women were entering the workforce and looking for easy-to-make meals. Convenience cooking was starting to take off since wartime rations had been lifted on canned goods and new innovations in canning and freezing made packaged foods more accessible than ever.

The “Green Bean Bake” became very popular once Campbell’s started printing the recipe on the side of their cream of mushroom soup cans. That was not the only recipe Dorcas and her team were credited for helping create however. She was also a part of the team that created the tuna noodle casserole and Sloppy Joe’s made from tomato soup recipes. Dorcas has been quoted as saying she was very proud of the “Green Bean Bake” recipe and pleasantly shocked when she realized how popular it had become. Her hand-written original recipe card even made it into the archives of the National Inventors Hall of Fame in Akron, Ohio.

Over the years people have changed the recipe a bit to make it a better fit for their family. Here are two lighter versions of the original recipe: One is from Campbell’s and one is from the American Heart Association.

I will be thinking of Dorcas this Holiday season as my family enjoys a traditional green bean casserole!

One thought on “Green Bean Casserole”