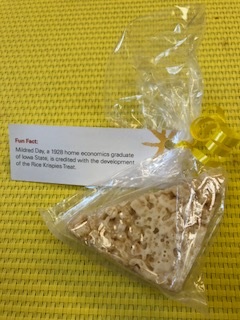 I recently wrote about the inventor of the Green Bean Casserole. It piqued my interest in finding out more about other inventors of some of my families favorite foods. One of those foods is the Rice Krispie Treat. I love that it’s invention is credited to an Iowa State University graduate!

Kelloggs Rice Krispie Treats is a trademarked name. The recipe (cereal, marshmallows, butter and vanilla) has never changed. Many of us put our own twist on the treat by adding extra ingredients or toppings however.

Mildred Ghrist Day is the woman credited with developing the original recipe. She was born in 1903 in Marion County Iowa. She went to Iowa State University and majored in Home Economics. Even before she received her diploma she had a job secured at the Kelloggs cereal company in Battle Creek, MI. She tested recipes in the company’s large kitchen and conducted cooking schools for Kelloggs across the country.

Kelloggs Rice Krispies cereal was developed in 1927 and came on the market in 1928. By 1939, Mildred and a co-worker had created the Rice Krispies Treat. History has it that the recipe was possibly inspired by an earlier recipe that had puffed wheat and molasses in. Mildred felt marshmallows would be less messy than molasses and began experimenting. Mildred’s daughter, Sandra, remembers that about six months after the invention, Kelloggs received a call from a Camp Fire girls organization looking for ideas for a fundraising project. The Rice Krispie treat was originally known as marshmallow squares and Kelloggs decided to test-try the product for the Camp Fire girls request. They sent Mildred, with a giant mixer and huge baking trays, to the Camp Fire girls in the Kansas City area. Mildred made many batches of the then known as marshmallow squares. The mothers of the Camp Fire girls would wrap the treats then send the girls out to sell them door to door.

Although the recipe had been published in newspapers earlier, in 1941 Kelloggs put the recipe on the side of its cereal box for the first time. They remain popular to this day.

In honor and memory of Mildred, Iowa State University students created a gigantic Rice Krispies Treat as part of the VEISHEA celebration in 2001. It weighed 2,480 pounds and was made from 818 pounds of Rice Krispies cereal, 1,466 pounds of marshmallows and 217 pounds of butter. What an accomplishment!