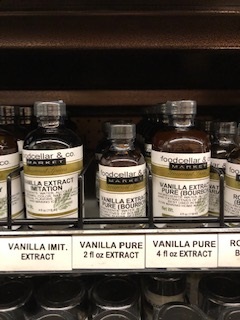 If you have done a lot of Holiday baking you probably noticed the price of vanilla has risen substantially in recent months. Vanilla is the world’s most popular flavoring. You can purchase it in two forms – pure and imitation. Pure is derived from seed pods of vanilla orchid vines and imitation is made in a lab. One percent of the world’s vanilla flavor is real and the rest is imitation. There is definitely a big price difference between the two.

Part of the reason the price of vanilla has gone up goes back to 2017 when a cyclone wiped out 30% of the vanilla orchid crop on Madagascar. Madagascar is an island that produces about 80% of the world’s vanilla beans so that made a big difference for production.

By FDA definition, pure extract means the vanilla flavor must come only from vanilla beans. For pure vanilla, the vanilla orchids are hand-picked. After harvesting they are cured, sweated, dried, and conditioned to fully mature their flavor. The beans are then soaked in an alcohol and water mixture and the flavor is extracted from the pod. FDA regulations require pure vanilla extract contain at least 35% alcohol. Additional alcohol content is also allowed. Imitation vanilla contains less alcohol or none at all.

Synthetic or imitation vanilla is flavored primarily with synthesized vanillin. Vanillin is the main flavor component of cured vanilla beans. Vanillin that is synthesized in a lab is identical at the molecular level to vanillin derived from an orchid so the taste is the same. Caramel coloring is also usually added to imitation vanilla. As I mentioned earlier, the FDA requires pure vanilla extract to get its flavoring from vanilla beans only. That FDA requirement relates to flavor only however. Some may contain a little sugar or corn syrup. Pure vanilla extract that has been stored properly in a cool, dark area will remain safe indefinitely. If it has been exposed to high levels of moisture and light it may lose some of its potent aroma and flavor over time or develop a hazy appearance but it will still be safe to use. Imitation vanilla will remain safe for 3 to 4 years if stored properly.

It is interesting that a couple sites I referenced, Cooks Illustrated and Epicurious, did taste testing of products that were made identically except for using pure vanilla in one and imitation in the other. In many instances the people doing the taste testing preferred the imitation vanilla over the pure. I think that definitely relates back to the molecular level of the vanillin being identical whether it was made in a lab or came from the bean.

It is also interesting to note that the compounds that make up pure vanilla flavor can’t survive high-heat cooking. So pure vanilla in cookies adds little because they are baked @350 degrees. Using pure vanilla in icings/frostings, puddings, custards, milkshakes and frozen desserts makes more sense as they are not heated at all or not heated to a high temperature.

Vanilla is one of my favorite flavorings so I have definitely noticed the price increase. After doing this research though I will try and use the pure for things I am not cooking to a high temperature and use imitation for the rest.