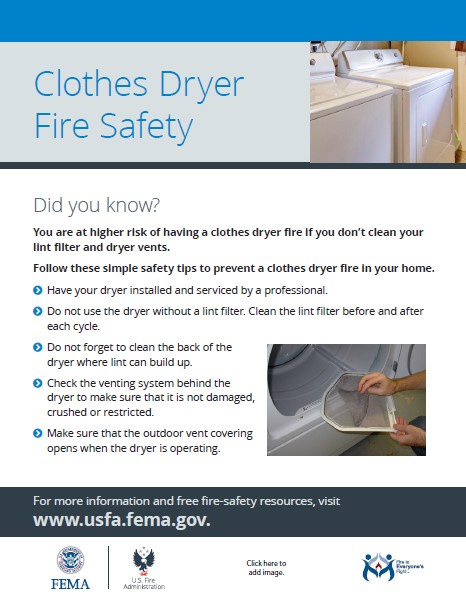 Most people don’t think about their clothes dryer as being a potentially dangerous appliance in their home.  Unfortunately, dryers are the source of thousands of house fires each year as well as some household mold issues.   With just a little regular cleaning and maintenance, you can protect your family and home from these dangers.

It doesn’t matter if you have an electric or gas clothes dryer.  The problem is lint.  Lint builds up in the lint trap, inside the vent hose and duct work, and inside the vent.  Whenever this happens, there is a reduction in air flow resulting in reduced drying efficiency.  Lint is also responsible for causing humidity levels to increase around vents and duct work which in turn can cause mildew and mold to develop in walls and insulation.   And most importantly, lint is combustible and causes fires.  Failure to clean the dryer is the leading cause of home dryer fires.

Here’s some tips for keeping your dryer, duct work, and vent as lint free as possible.

A little dryer cleaning in a timely manner will greatly reduce the risk of fire.  Further, avoid starting the dryer before going to bed and running it while no one is at home.

For more information see the safety alert from the Consumer Products Commission,  https://www.cpsc.gov/PageFiles/118931/5022.pdf

Additional flyers like the one at the beginning of the blog are public domain publications and available for download from FEMA at https://www.usfa.fema.gov/prevention/outreach/clothes_dryers.html