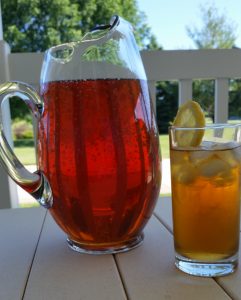 June is National Iced Tea Month!  I didn’t know we celebrated iced tea nationally but after reading that iced tea makes up 85% of all tea consumed in the U.S., I concur that Iced Tea should be celebrated.   Further, I learned that iced tea was born in America.  Wikipedia relates that iced tea started to appear as a novelty in the U.S. during the 1860s.  (Prior to that, very little tea was consumed as it was thought to be unpatriotic after the Revolutionary War.)  By 1870, iced tea was quite widespread as it was available on hotel and railroad station menus.  Its popularity increased quickly after being introduced at the 1904 World’s Fair in St. Louis by Richard Blechynden.

Iced tea is my ‘go to’ summer beverage as an alternative to soda.  With the popularity of iced tea, we now have a large assortment of teas to use to make our cherished iced tea.  While some manufacturers have developed specific blends or formulations for iced tea, just about any tea can be enjoyed cold.  Until recently, iced tea was made by either brewing with hot water or brewing with the sun.  For years, I used the natural rays of the sun to make sun tea as the mild heat of the sun seemed to enhance the flavor of the tea and cut down on the tannins.  Well, no more!  Since 2011, the Centers for Disease Control have highly discouraged making sun tea as it is the perfect medium for bacteria growth.  Sun tea gets warm enough to brew tea, but it does not get hot enough to kill a ropy bacteria called Alcaligenes viscolactis that may be present in the water or in the tea or herb leaves.  Ropy bacteria is commonly found in soil and water.  If tea containing the bacteria is consumed, it has the potential to cause abdominal infections and illness.

The Centers for Disease Control and the National Tea Association recommend the following for brewing tea:

Brew tea by steeping tea at 195 degrees F for three to five minutes. Some tea drinkers complain that when tea is brewed with hot water, the tea becomes cloudy. The cause of the cloudiness may be due to tannins from the tea being released into the solution when the tea is cooled too rapidly or by chemicals or minerals in the water supply. One way to avoid cloudiness due to the tannins is to gradually bring the temperature of the steeped tea down with cool water before refrigerating or adding ice.  If chemicals in the water are causing the cloudiness, let the water sit for several hours to evaporate the chlorine.  Tap water containing minerals may need to be replaced with distilled or reverse osmosis water to eliminate the problem.  While cloudy iced tea may not be desirable, it is not a health risk.

Tea can also be brewed safely in the refrigerator by putting tea in cold water for six hours to overnight depending on the strength of the tea desired.  It can also be made more quickly with the Cold Brew formulations now available.

One should only brew enough tea to be consumed within a few hours.  When tea is not in use, it should be refrigerated.  If you use an iced tea maker, be sure to wash, rinse and sanitize the equipment regularly.

So get out your tall glasses and ice cubes and celebrate the warm weather by pouring yourself a safely home-brewed glass of iced tea be it plain, sweetened, flavored, or spiked.

Ice tea certainly offers a healthier alternative to soda which is our country’s #1 beverage of choice.