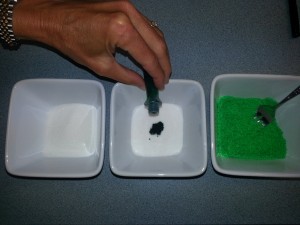 It is always a fun project to get the family together to decorate cookies. An inexpensive way to add color to them is to make your own colored sugar. It’s fun, easy to do and stores well. To make your own at home simply pour some sugar into a bowl and add a couple drops of food coloring. Mix the food coloring in well with a fork and add more as needed until you get the color you want. Let the sugar dry out (an hour or so at room temperature) before storing it in an airtight container. Make several colors and have them ready to use when you are in the mood to bake and decorate cookies.

I am trying to use more nutritious whole grains in my everyday diet and have recently discovered amaranth. This grain was a staple of the ancient Aztecs and Incas and is now known to be an excellent source of protein and other important nutrients.

For gardeners out there, it is good to know that amaranth grows well in the Midwest. It has a purplish-red plume topping and a reddish-green stalk. The greens have a delicious, slightly sweet flavor and can be used in cooking or in salads. The stems can be prepared like asparagus. The seeds (as seen in the accompanying picture) can be cooked like a cereal or sprouted. Because flour from amaranth lacks gluten, it is suitable for muffins and for flatbreads, but is not a good choice for yeast-raised breads. When substituting for wheat flour in recipes, use one part amaranth flour to three parts wheat. Nutrition information for amaranth is as follows:

Most baking days I enjoy retarding my bread dough, feeling the slower rise results in a more complex flavor. But there are days when I don’t have enough time to take the leisurely approach. On those days, I use the rapid method for proofing my dough by using the microwave as a proofing box. This method takes about half the conventional time for proofing. Follow these steps: 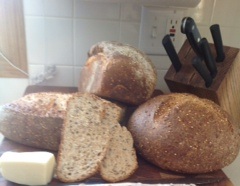 One of my favorite breads to make on a regular basis is Sourdough Quinoa Bread. Quinoa is relatively new to the American market and has recently received much attention. Though unheard of not too many years ago, quinoa is actually referred to as an “ancient grain” and the “mother grain” of the Incas. Quinoa is a complete protein, with an amino acid balance and higher protein content than any other grain. It’s a good source of iron, magnesium, zinc and some B vitamins. There are many recipes using this nutritious ingredient on-line. Check one out today!

A couple of weeks ago I was fortunate to attend a Fermentation Workshop in Madison, Wisconsin. Being a sourdough enthusiast, I was thrilled to see so many people interested in the fermentation process. Classes were held in subjects ranging from making sauerkraut and kimchi; brewing beer; making Indian sourdough bread (dosas) and regular sourdough bread (aka San Francisco sourdough); making kefir, yogurt, kombucha and more. I have an interest in all of these topics and will discuss a few in this blog in the coming weeks.

My first fermentation passion started eight and a half years ago as I watched Julia Child’s “Cooking with Master Chefs” one Saturday morning on our local PBS station. Nancy Silverton was the chef of choice in this particular show and she stirred up an amazing sourdough starter using very few ingredients. As soon as the show was over I mixed the ingredients to form my first (and current) starter and eventually gave it a name – Fremont! The picture above, left, shows Fremont after a day or two of feeding. As pictured it is easy to see he is ready and waiting to create a delicious sourdough bread product, be it a baguette of bread, a crisp pizza crust, a dinner roll or quick and easy sourdough pancakes. The picture on the right shows a sourdough kamut berry bread in front and several loaves of sourdough quinoa bread on the cutting board.

To begin a sourdough starter of your own, all you need do is combine: 2 cups flour, 2 cups warm water and 2 tablespoons of dry yeast (not Rapid Rise) and mix well. Cover lightly and allow to  stand in a warm place till light and foamy, at least 8 to 10 hours. Place ½ cup of this mixture in a clean jar and cover. Refrigerate. This is the Basic Sourdough Starter. The remaining ‘sponge’ (about 2 ½ – 2 ¾ cups of the starter) can be used immediately for making into baked products. Then each time baked products are to be made, remove the basic dough starter from the refrigerator. Add 2 cups flour and 2 cups warm water. Repeat as for making starter and sponge, reserving ½ cup for refrigeration and using the remainder for making the product you want. I will share some sourdough recipes in future posts, so be watching. 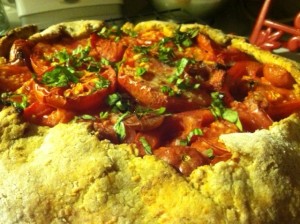 Late last summer my garden was producing more delicious tomatoes than I could easily use. I was in the mood for a savory pie but not ready to put the work into making a regular two crust pie with top and bottom crust, crimping the edges, etc. I decided to make a Galette,  another name for a rustic pie, requiring much less effort. French in origin, a Galette is a single pastry crust rolled into as large or small a circle as you desire. The filling can be either sweet or savory and is only limited by your imagination. Common fillings include fruit, jam, vegetables such as tomatoes and nuts, meat and cheese. Create a filling as if making it for a pie, dollop it into the center of your dough and leave 1 ½ inch border. Fold the uncovered border over the edge of the filling and pinch into pleats. Bake as you would a pie and enjoy! Since my tomato plants are not even in the garden yet, I’m thinking about making a spring-themed galette in the coming days. The biggest decision I now have is to decide between a savory asparagus/parmesan galette or a sweet/tart rhubarb galette. Maybe I’ll make both!

A year ago this month I was busily baking cookies for my son’s wedding. I became quite proficient at making large batches of dough, shaping into cookies and freezing them to be baked at a later date (for fresh-baked cookies any time).

If you have an event coming up that requires a large number of home baked cookies, you can make the dough ahead of time and freeze to be baked fresh in time for the event. Dough can be shaped before freezing by arranging on cookie sheets, placing in the freezer for one hour to quick-freeze and then transferring the cookie balls to a freezer container or bag. Most cookie dough can be kept frozen for up to six months. Include baking time and temperature on the freezer label. To bake, place frozen cookies on baking sheets and bake, without thawing, as directed. A few extra minutes may need to be added to the total baking time.

Flour is an ingredient that we often take for granted. Have you wondered what the difference is between conventional and stone ground flour? Conventional flour has the bran and germ removed as these will become rancid within just a few weeks.  Stone ground crushes the entire grain, so the bran and germ remain in the flour, adding flavor but shortening shelf life of the flour. Store these types of flour in the freezer to keep them fresh.

Have you ever wondered why flour is bleached? Freshly milled flour will make a very dense loaf of bread. After the flour ages, it will produce a much nicer loaf. A chemical reaction occurs at the end of the glutenin (one of the two proteins that combine to make gluten) protein molecule; this change makes the gluten longer and more elastic. Starting early in the 1900s millers began to bleach flour which caused the chemical reactions to happen immediately instead of occurring over the course of a few weeks.

All wheat flour contains gluten; it is the protein in flour that provides structure in baked foods. Some flours contain more protein than others; bread flour can be 12-13% protein while all-purpose flour has only 11-12% protein. Pastry flour can be as low as 7-8% protein.

Whole wheat flour may be high in protein, but much of that protein comes from the germ and aleurone layer of the wheat. These proteins will not combine to form gluten; they do interfere with gluten formation. This causes a much more dense loaf of bread. Bread flour has very strong proteins that make a light, high, and chewy loaf. Pastry flour has weak gluten that makes a crisp and tender pie crust.

Much of the information in this post is taken from “On Food and Cooking, the Science and Lore of the Kitchen”, Harold McGee, 2004 chapter 10.