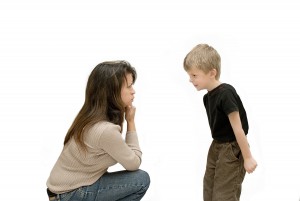 My first two children were relatively “easy” babies.  Then I gave birth to my third child and I immediately, knew something was different.  He was  intense and persistent…right from  birth.  He required less sleep.  He demanded more and  most of the time he got more or at least he put up a good fight.    During his toddler years, I can remember wishing that he was less persistent.  But I have come to appreciate that his persistence is a wonderful, desirable trait and it is an absolute essential trait to success in the adult world.    I’ve had to re-think and re-frame this trait.   Especially—after much self reflection I have realized that it is also one of my stronger temperament traits.  Some could describe him as “argumentative”, but I have chosen to view him more positively, as  a young man who is “strongly committed” to his goals.

Do you have child like my son Cole who seems to stand firm and have a hard time accepting “no” for an answer? When he get an idea in his head, he is determined to carry it through.   He has been known to push and sometimes almost shove to have things done his way.   Persistence is one of the temperament traits that every child possesses, and is one of the contributing factors that make every child unique. Some kids like my Cole are on the extreme or high end of the “persistence” scale.

I have learned that being aware of your children’s unique temperament and  how they respond to the world around them can help you and your child understand and learn to work together to create more harmony within your home and to provide an environment where everyone can be more successful.   From experience I know that persistent children can wear parents down with their strength of will. It helps to remain neutral and not engage in battle with your children when they are upset. They really need you to take charge when they get locked-in or stuck and to help them find ways to get calm.

There is a positive side to being persistent. These children tend to be goal oriented. Once they set a goal, they will stick with it, determined to work hard to reach their objective. They tend to pay close attention and listen to your instructions more thoroughly than their less persistent peers. Once they begin a task, including chores, they tend to endure to the end. Because of their unwavering sense of commitment, they often are big achievers with high hopes and goals and they often become strong leaders as they follow their passions.

So what’s a parent to do?  From my experience I have tried to focus on three simple strategies.  First I have learned ways to stay calm and avoid power struggles that I could lose. We have learned how to find solutions where we both win.  Secondly—I have tried to teach him strategies that calm him when he gets upset, such as learning to compromise and learning to be more flexible.   He has learned how to “take a break”, when he’s getting frustrated and prior to his breaking point. And lastly, I have learned that I am a “persistent parent”.  There must be a genetic correlation with this trait!  So I have learned to “be the adult” and relax my persistence.  I’ve learned to drop arguments and remind him that we can problem solve together.

Janet Smith is a Human Science Specialist-Family LIfe with Iowa State University Extension and Outreach. She currently provides family life programming in eight counties in southeast Iowa. Janet is a "parenting survivor". She is the mother of Jared-21, Hannah-20, and Cole-15. She and her husband, David have faced many challenges together, including their son Jared's Duchenne Muscular Dystrophy diagnosis.