Think about the last time you made your favorite recipe using canned dried beans. You likely strained the beans and rinsed the juice down the drain. Have you ever wondered what else you could do with the liquid? 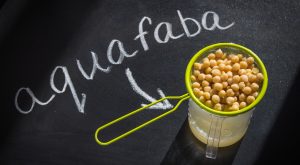 Aquafaba (Latin for water and beans), the liquid from canned dried beans, is a popular vegan egg substitute for meringues, mousses, and whipped creams. It has also been touted as a useful alternative for individuals with egg allergies, allowing them to enjoy some recipes that they traditionally would not be able to.

Aquafaba’s ratio of starch and protein makes it work like a binding agent, thickener, and emulsifier. A food safety benefit of aquafaba is the reduced risk of foodborne illness. It does not need to be baked and has a lower chance of contamination in contrast to traditional egg-containing recipes where Salmonella would be a common bacteria of concern.

Here’s what you need to know to try this new food trend:
• 3 tablespoons of aquafaba = 1 whole egg
• 2 tablespoons of aquafaba = 1 egg white
• As a binding agent, be sure to slightly whip the aquafaba until it is foamy before using.
• In meringues and mousses, whip with 1 teaspoon cream of tartar for 5–10 minutes until stiff  peaks form.
• Look for low-sodium or no-salt-added beans if you plan to use the aquafaba to decrease sodium content.

Although the amount of aquafaba in most recipes will be minimal, you may experience gastrointestinal distress or flatulence if you are sensitive to bean sugars. You may want to take a test run to see how you will respond to the product.

Many crazy diets appear in the headlines. Some recent offerings include the feeding tube diet and the tapeworm diet. The latest diet to make headlines is the cotton ball diet, and the science behind it resembles the structure of cotton—unsupportive fluff.

The diet involves consuming five cotton balls dipped in orange juice, lemonade, or a smoothie. The claim is that you will feel full without gaining weight. Some dieters consume these before their meal to limit calorie intake, while others rely exclusively on the cotton balls as their “food” intake.

Medical experts agree that nothing good can come of this diet, and in fact it is very dangerous for the following reasons:

A healthier and safer approach to feel full is to make sure you get plenty of fiber in your diet. Follow these tips to get the recommended 25 to 38 grams of fiber each day:

For more information on how to safely achieve and maintain a healthy weight, visit MyPlate.

Want to know more about choosing high fiber foods? Check out these resources:

January 7, 2014
healthy living beans, diet, dried peas, lentils, whoe grains
Leave a Comment on The Diet That Is All Fluff 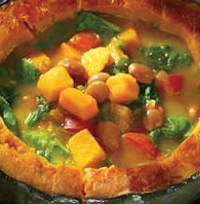