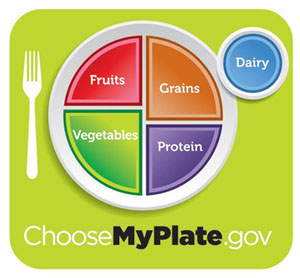 Food portions can be a challenge, but choosing sensible amounts of all food is important for achieving and maintaining a healthy weight. The best way to achieve and maintain a healthy weight is to make small, long-term changes in what you eat and drink, along with getting daily physical activity.

Set realistic and achievable goals for your health. Remember, if you slip up one day don’t dwell on it, just press on with your health goals in mind. Download Key Nutrients from the Extension Store for additional information.

The USDA released the new food icon ‘MyPlate’ on June 2, 2011. The intent of the new icon is to simplify the dietary guidance included in the Dietary Guidelines 2010 and MyPyramid. MyPlate is not intended to replace MyPyramid, but rather simplify the message making it easier to follow for Americans.

The key message of MyPlate is the proportion each food group should contribute to your plate.

While the proportion of food groups on your plate is fairly straightforward, there are
some key messages not represented by the icon that Americans need to keep in mind.

Each of these messages remains consistent with messages from the Dietary Guidelines for Americans 2010 and MyPyramid. The real benefit of MyPlate is the simple, concise message of proportionality on your plate.