Over the past few, a number of states across the nation have been dealing with what has come to be known as the ‘dark-store’ strategy. The phrase ‘dark-store’ which was coined by the property assessment community refers to the method used to assess the value of a commercial property. Across the nation, there are growing instances of big-box retailers challenging the accuracy of valuation methods used by assessors. In recent past, they have been successful at not just questioning the accuracy, but have been successful at changing the methods to effectively lower the valuation estimates, thereby paying lower amounts of property tax. “Big-box retailers argue that the market value of their commercial property should be the sale price of similarly sized but vacant retail buildings. They point out that these buildings are extremely hard to sell as-is once the retailer moves out. They tend to sit empty for long periods. Thus, the assertion is, they aren’t worth nearly as much as local tax assessors have traditionally assumed in valuing the property.” (Governing.com, Sept, 2016)

Effectively, the dark-store strategy reduces the value of commercial property, which in turn reduces the amount of property tax that the owner has to pay. In Michigan, where this practice is already in place has created significant shortfalls in local government revenues leaving them stranded to finding alternate revenue sources to fund services. In addition, there is evidence that the retail community is interested to pursue this in other states including Alabama, Iowa, Florida, Indiana, North Carolina, Ohio, Tennessee, Washington and Wisconsin (NACO, 2016).

It is common knowledge that local governments (cities, counties and schools) in Iowa rely on property tax as a major revenue source. For example, for the year 2015, City of Carroll and Carroll County earned approximately 25 and 36 percent of their revenues from property taxes respectively. In its most simplistic form, property tax revenue is determined using two variables, the taxable property base and the property tax levy rate. The taxable base is the portion of the total property assessment that is done by assessors in every county. Depending on the classification of property – residential, commercial, industrial and commercial, all or portion of the market value of the property is used for property tax calculation purposes. Three common types of methods used by property assessors to arrive at market value include the market data or comparable sales approach, income approach and the cost or summation approach. Once the market value has been determined, the rollback or assessment ratio, determined by the state is used to calculate the assessed value of a property. This value is used along with the property tax levy rate to arrive at the amount of property tax that is owed by a property owner. While residential property accounts for a large portion, the rest three classes of property are as important, especially in urban areas and small regional hubs, as well as in rural parts of Iowa. Commercial property, which includes retail establishments form a key group that contributes to the tax base. The proposed dark-store strategy, if implemented will significantly reduce the amount of property tax that a retail store owner would have to pay.

To get a sense of the property tax base in Iowa, figure below on average fiscal capacity illustrates the fiscal capacity for each of the 99 counties in the state and provides a visual comparison.  Fiscal capacity is an index to assess the strength of a government’s (state and local) tax base. Given the importance of property taxes for local governments, the index represents the relative strength of property tax base that exists in each county. Property valuation data for 2014 for all 945 cities in Iowa were used in creating the index and the value in each county is an average of the fiscal index of all the cities that reside within that county. A county that has an index value of greater than 100 has a relatively stronger tax base and those that have less than 100 have a relatively lower property tax base to generate property tax revenue. The cities were grouped into six categories based on population size to create the index. As the index represents a value relative to a group, the group’s index value is 100. 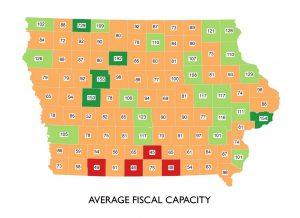 Given the complexity of property tax assessment and the differences in appraisal laws between states, it has been tricky for lawmakers to come up with legislative solutions that can assist local governments to respond to this situation. While some states have already done and others are considering laws to protect the local governments, places where this strategy has been implemented are already feeling the financial stress.

Given the power vested upon the local governments, they have little scope for increasing tax rates. In Iowa, the state through legislation and tax and expenditure limitations dictates what local governments can and cannot do by placing caps on revenue generation and spending increases. These limitations often tie the revenue and expenditure growth to the rate of population growth.  Therefore, the dark-store strategy, if implemented in Iowa will significantly add to the fiscal stress that local governments currently face. In addition, local governments in Iowa are currently dealing with a new law (SF 295) that has put a dent into their budgets. While the state is back filling them to compensate for the revenue losses, it is not a promise in perpetuity and it might not be very long when cities, counties and school districts might have to find additional revenue sources. On top of this, the dark-store strategy, if implemented will make their financial situation worse.

Under such circumstances, local governments will perhaps need to make unpopular choices – cutting services or laying off employees or a combination of both. In addition, it is likely they will not be able to pursue major capital improvement projects. Overall, the dark store strategy if adopted in Iowa could alter the trajectory of community and economic development efforts that communities pursue, in significant ways.